Home » Why Do Some Territories Perform Better Than Others? How Demographic Intelligence Can Help

Why Do Some Territories Perform Better Than Others? How Demographic Intelligence Can Help

Factors Contributing to Success or Failure

Which factors contribute to whether a franchise territory is a relative success or failure? The following are the most important influences on a territory’s performance. By using demographic intelligence, you can understand the  sales potential of the territory and take proactive steps to improve your chances of a business thriving in the area.

Perhaps the most important factor when it comes to the performance of a territory is where it was placed to begin with, and the planning process that went into this decision. Some franchise businesses create territories in an ad hoc manner, simply defining them around where a franchisee is based whenever they make a territory sale. These companies would argue this gives them more freedom over their recruitment strategy and allows franchisees to operate where they are already established. However, creating territories in this way sacrifices control over development of the franchise brand and marketing strategy - there simply is no way of knowing how fruitful the new territory will be.

The alternative is to rationally map out your franchise territories using Mapping Software, which takes into account the market potential of an area, the number of competitors and the availability of your target demographic and access to customers. Creating territories at the end of a carefully planned process sets them up to succeed in the long term.

The size of your territory will greatly impact its potential for growth and development. It is important to find your own ‘Goldilocks Zone’, and the right size will very much depend on the nature of your business.

Some franchises make the mistake of making their territories too large, in the belief that this will enable them to charge a higher franchise fee, or come across as being better value for money. However, it also increases the amount of competition your franchisees are likely to face within the territory, as well as making it problematic for them to service all the customers in the area. The opposite problem is making a territory too small, which is a common mistake in large cities such as London and Birmingham. The risk you take with a small territory is that there will be too many similar businesses within an area, leading to an oversaturated market and impaired performance.

The best way to use demographic intelligence to avoid this problem is to determine your territories not on geographical size, but on market potential. It follows from this that some territories will be physically larger than others, but will have a similar sales value when recruiting franchisees.

There is arguably a performance differential between exclusive and non-exclusive franchise territories, although some franchise businesses will disagree. There are arguments for or against each model. With an exclusive territory, a franchisee is restricted to doing business in a carefully defined geographical area. A non-exclusive territory is still geographically bound, but under some circumstances, franchisees are allowed to trade outside of the area. For instance, a franchisee could maintain existing business relationships with customers outside  the territory.

Non-exclusive territories are more common for franchises that operate under a licence model, rather than those with an established retail store or office. To increase your business performance across all your franchise territories, it is important to understand which model works best for you. A lot of businesses prefer the exclusive model, for instance, because it reduces competition between franchisees and allows full exploitation of each territory. Again, utilising demographic intelligence will tell you about the purchase habits of your customer base, allowing you to intelligently plan your territories and the model you use.

Are there enough potential customers in your territory to allow a franchise business to thrive there three, five or ten years into the future? Some territories find that their performance plateaus or drops off abruptly after a couple of years, not through any fault of the franchisee, but simply because they have fully exploited the market availability. Many franchise businesses find it useful to map out territories with set levels of future growth in mind, or to readjust boundaries periodically to allow for further expansion.

The available market reflects the physical number of customers that live or work in the territory. It normally isn’t sufficient to define a territory’s potential solely by the number of businesses, or its adult population, as different products and services appeal to different demographics. By understanding your business and who your target demographics are, you can use demographic intelligence to map out the areas with the most potential throughout the country. Using this information, you can create balanced territories that each enjoy a high level of performance.

Find out more about optimising your franchise territories

Demographic intelligence is a powerful tool for franchise businesses looking to boost the performance of their territories. For more information, download our free ‘Franchise Territory Optimisation Guide’, an e-book that covers strategic planning from a number of different angles. 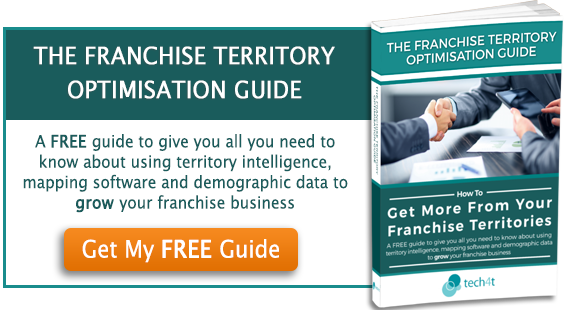 Does your field force deliver for your business … and your customers

Does your field sales force deliver for...
Learn more →